Sneaking Down to Cincy – Part 2 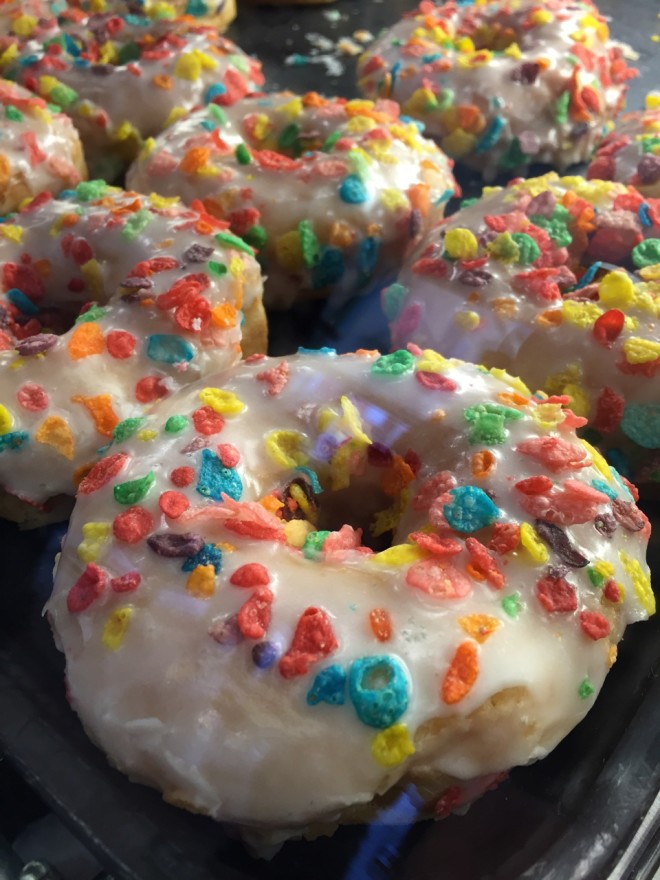 Donuts with cereal on them!

Now that I’ve got your attention, let’s catch up on our Cincinnati trip. So far we’ve done breakfast at Sleepy Bee Cafe and explored the Cincinnati Museum Center and Rhinegeist. Now, continuing our adventures, we find ourselves pre-gaming dinner with donuts! We wanted to show the boys Holtman’s Donuts in Over-the-Rhine. 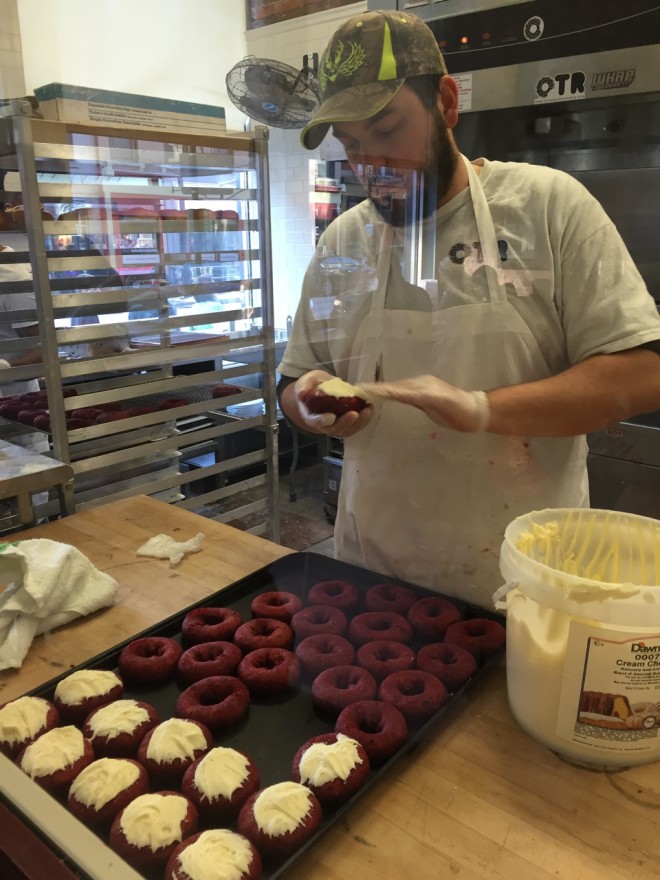 It’s an easy sell. Holtman’s is a classic old school donut joint with a handful of locations around Cincinnati. The space isn’t huge, but big windows let you watch the donut-making, like this high-tech application of cream cheese icing. 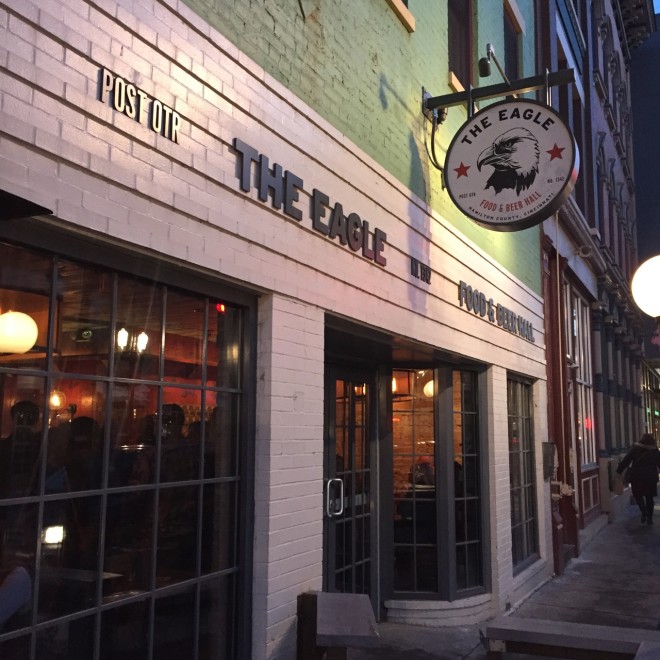 We enjoyed donuts at Holtman’s while we waited for our table at The Eagle. I’ve had many recommendations for the restaurant, and we’re excited to be getting a location in Columbus this year. 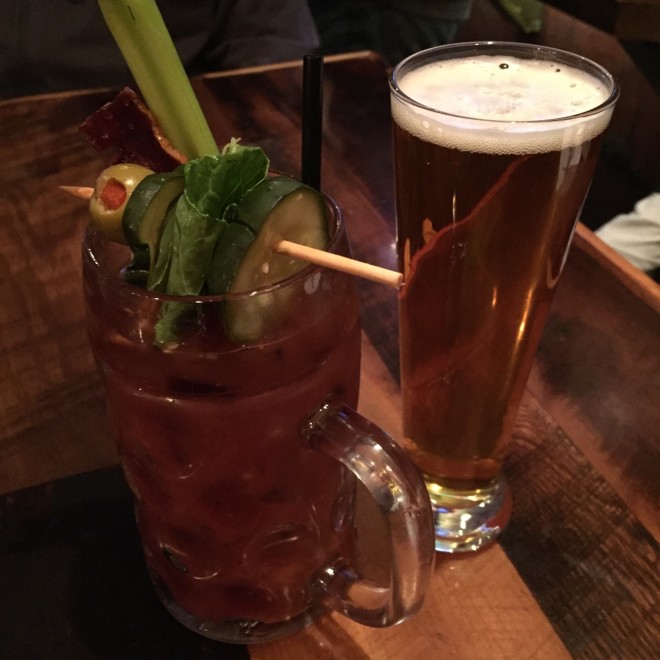 The Eagle was busy. We lucked out by arriving before 5 p.m. Our wait was about 20 minutes (enough time for donuts), but by the time we left the wait was topping two hours. We were led to a booth near the bar, where the four of us squeezed into the back and readied ourselves for fried chicken and mac and cheese. The adults enjoyed a beer (Rhinegeist’s Andromeda) and an almost too spicy Bloody Mary. 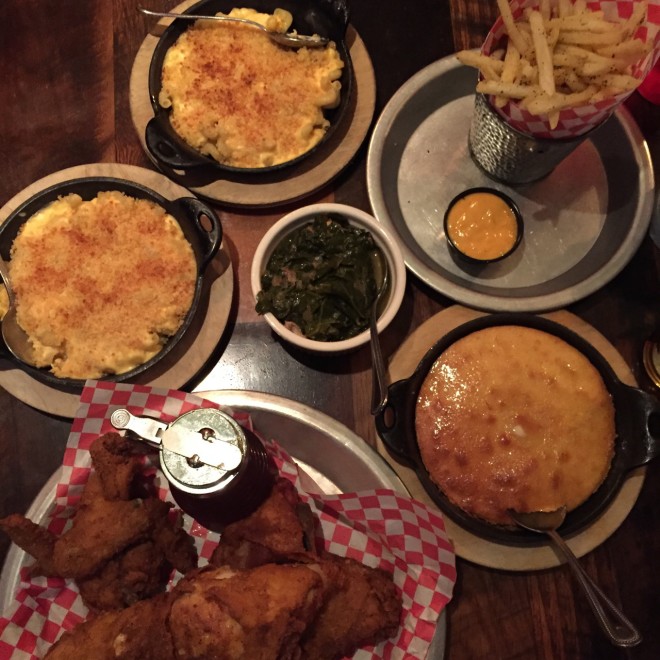 And then the meal arrived: a full fried chicken, collard greens, cornbread, mac and cheese, and fries. I appreciated that, for all the hype surrounding the restaurant, they just serve straight-up comfort food that’s done really, really well.  Nice smokey greens, a rich cornbread (I want to call it moist, but I’m avoiding using that word), mac and cheese that isn’t just a big, sticky lump. 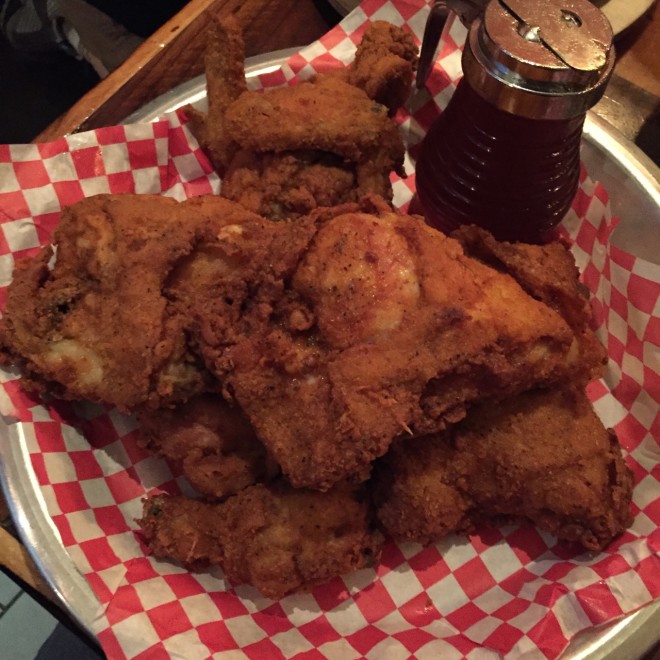 And that fried chicken: I’m a big, big fan. It’s perfectly juicy, and the breading had all the salty, peppery crisp you could ask for. I still found myself thinking about it days later.

After a filling meal at The Eagle, we trucked back to the hotel for some swimming and then crashed for the night. 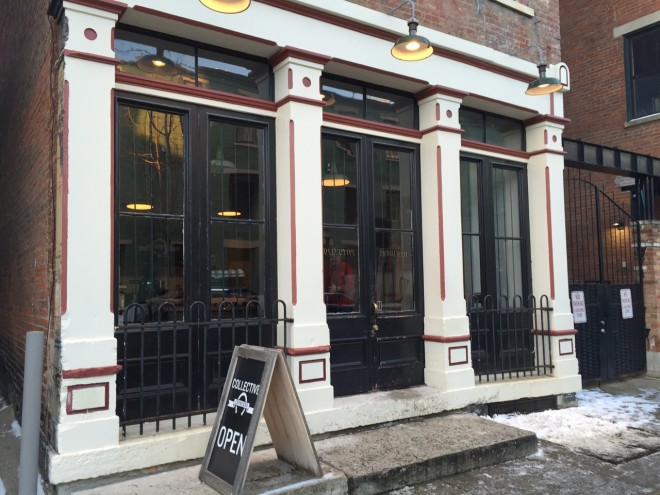 The next morning we woke up early, checked out of the hotel, and snuck over to Collective Espresso in Over-the-Rhine. The coffee shop is down a side street; we might not have found it without several recommendations for it (and a little GPS help). 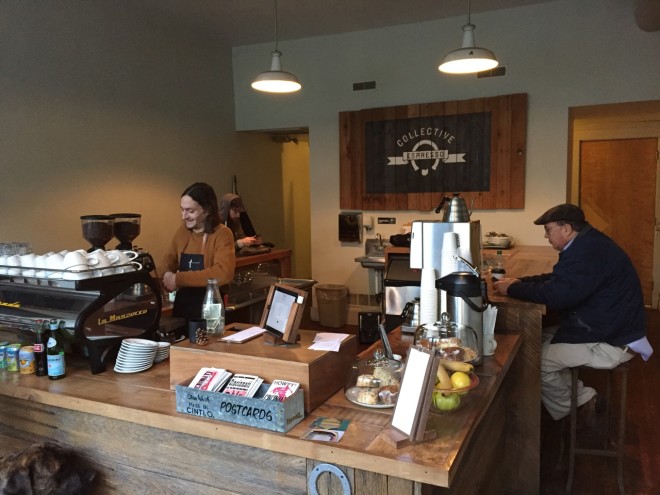 Collective Espresso is a small space, with seats around both sides of the bar and a couple small tables. But it was warm and welcoming on such a chilly morning. After a quick cappuccino and a cortado, we drove up to Norwood for breakfast at Sugar N’ Spice. 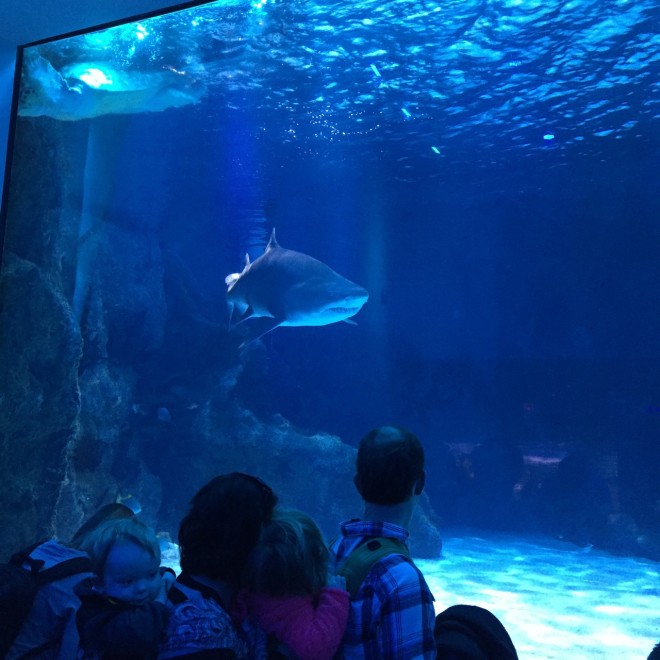 Then we headed across the river to the Newport Aquarium. I love a good aquarium, and this one featured room after room of tanks full of all manner of aquatic life (which I think is the definition of “aquarium”). Much of it was centered around a giant shark tank; as you travel through the aquarium you keep re-visiting the tank from multiple angles. At the very end you’re given the chance to walk across the Shark Bridge, a long, thin walkway (very safe – covered with nets) that spans the considerable length of the tank. 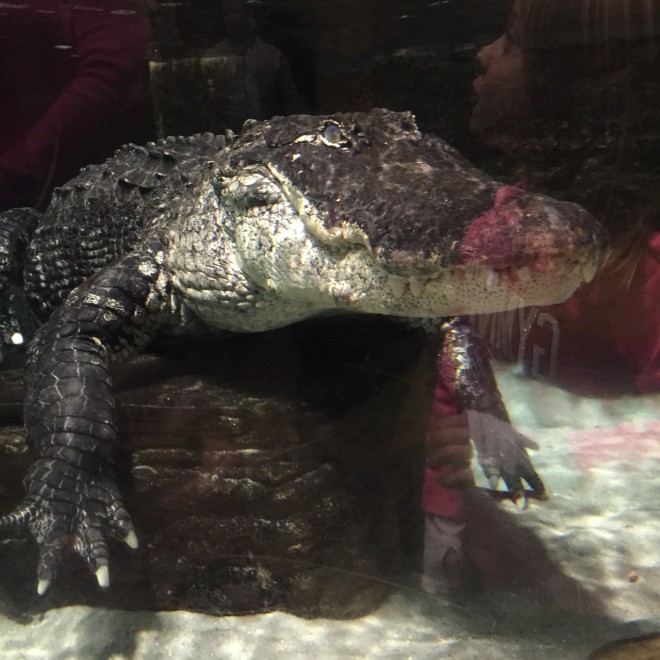 Our boys were particularly impressed by Mighty Mike, a 14-foot long alligator who was captured in Florida and eventually brought up to the Aquarium. They estimate he’s about 50 years old, and he sits as still as a statue, coming up for air every 30 minutes or so. You can’t help but crowd around the glass, waiting to see if he’ll move a muscle. 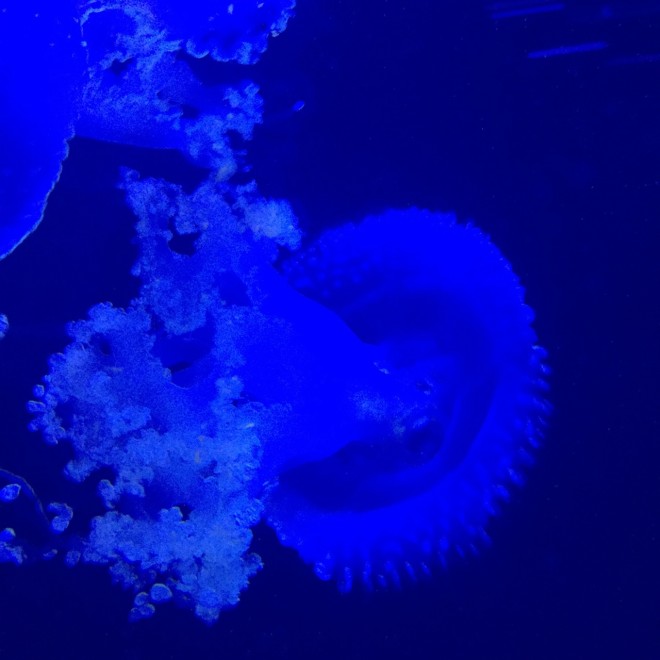 The soft lighting and ambient music of the jellyfish room will have you mesmerized for hours. 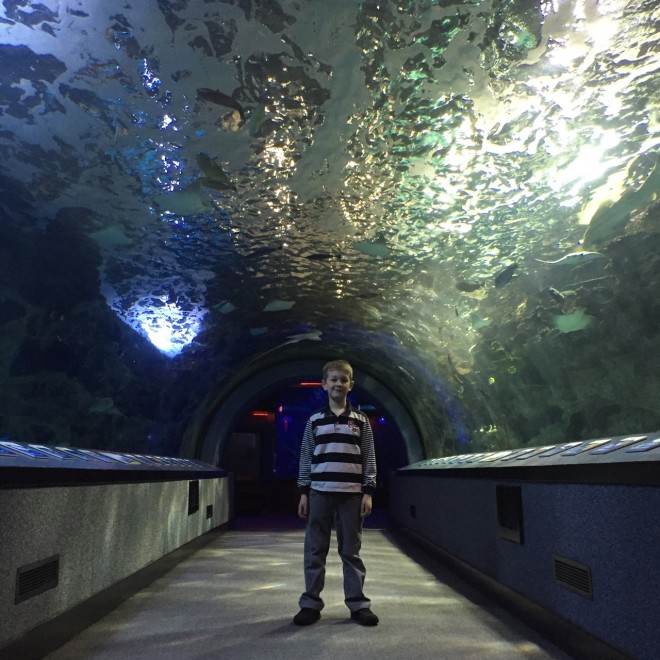 There are multiple glass tunnels under the big fish tanks, so you get to walk with sharks swimming overhead. 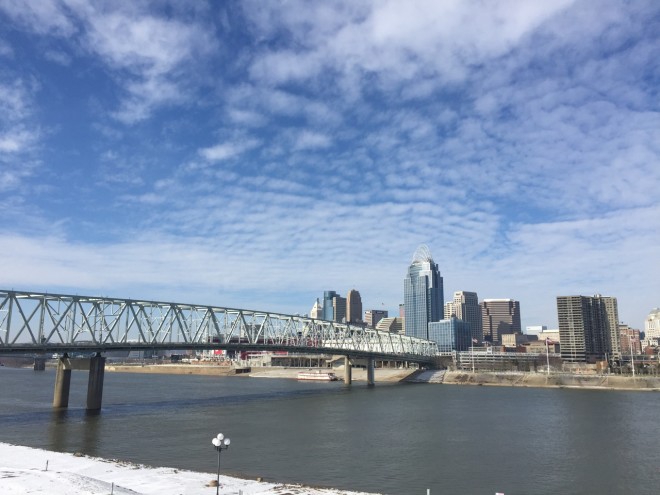 The Aquarium was a fitting end to our time in Cincinnati. We took one last look at the city from across the river, then loaded up to head back north. 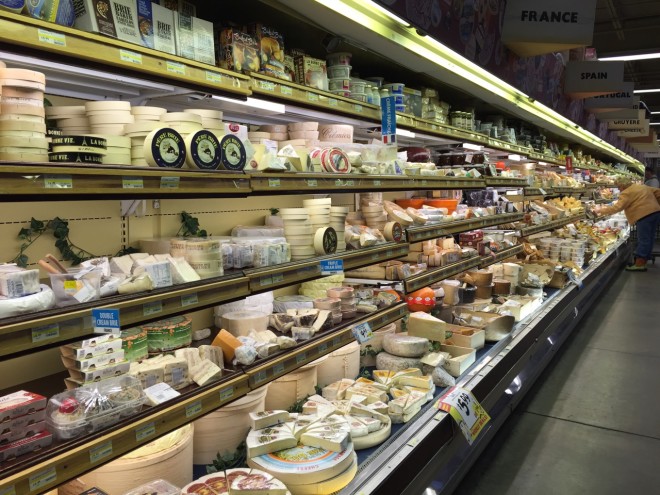 We decided to find lunch at Jungle Jim’s International Market in Fairfield. This was our first time at Jungle Jim’s. The store seems big from the outside, but it’s not until you get inside and see aisle after aisle and section after section that you fully appreciate the full scope of it. We began by picking our way past sushi, meats, cheeses, and a full butter bar. We watched mozzarella being made and picked out some smoked gouda for Will (his favorite cheese; he’s embracing his Dutch heritage). I mean, look at the photo above: that’s ONE aisle of oh, five cheese aisles. 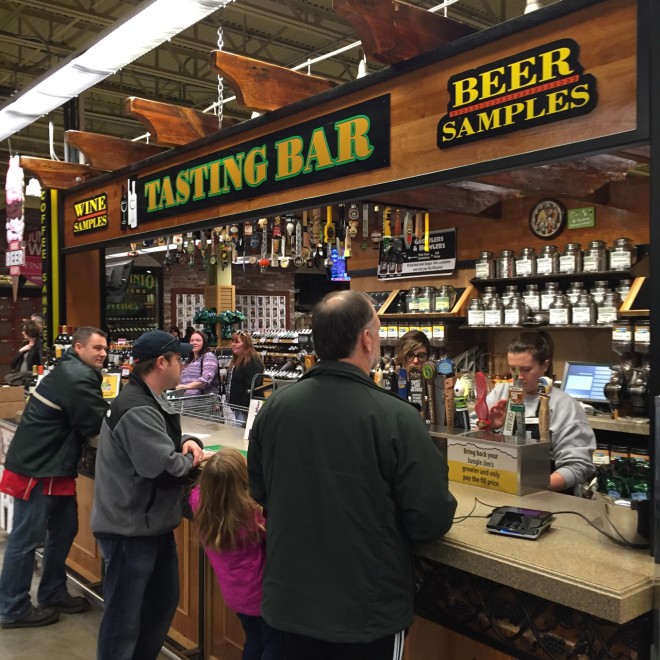 We also found the beer, wine, and spirits. I picked up a Jackie O’s barleywine on sale, we bought a pint of New Holland’s Dragon’s Milk to sip while we shopped, and we eyed the bourbon collection. And, yes, we used the “famous” bathrooms that look like porta potties from the outside. 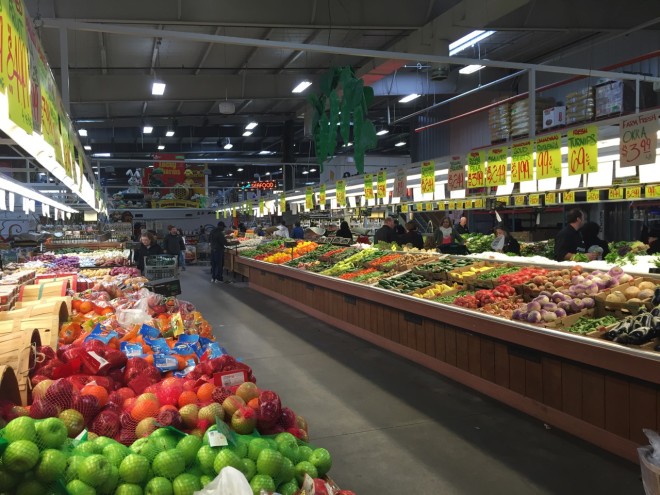 Then it was down more and more aisles. We were mainly browsing, but ultimately Mrs. Breakfast With Nick and I angled for the international section, specifically the British aisle (see what I did there?) that’s located under the giant pirate ship. There we picked up English bangers, chocolate and caramel McVitie’s digestives, and Cadbury Flakes – favorite snacks from our time in London a decade ago.

The experience at Jungle Jim’s was overwhelming but fun. I think we mistakenly hit it on Sunday afternoon when EVERYONE in the area was doing their shopping. We’ll have to return another time (maybe sans kids) for more leisurely exploration.

And that wrapped up our weekend in Cincinnati. Like all good trips, we made many new discoveries and were left we even more places to explore next time.

(Thanks to the folks from CincyUSA for providing the aquarium tickets!)

I go by Dr. Breakfast, but in addition to restaurants and recipes, I write about family travel, breweries and distilleries, the arts, outdoor fun, and so much more.