Shipping Out to the Erie Shores & Islands: Part 1 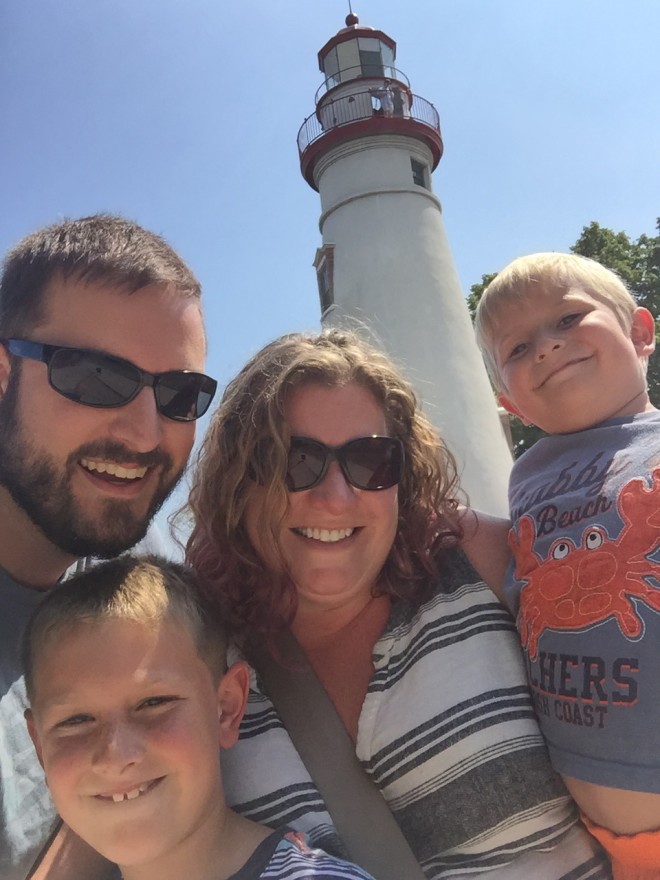 Our youngest Owen turned five recently, and to celebrate his birthday we trekked up to Lake Erie to see – wait for it – lighthouses. It’s an understatement to say Owen is a lighthouse enthusiast. He has a growing collection of 60+ ceramic lighthouses. He draws them constantly. He can name many of them, even obscure ones, by sight. We often joke he was born 150 years too late; he’d have been content as a lighthouse keeper in the 1850s. So it seemed perfectly fitting that we celebrate his birthday with a lighthouse tour. 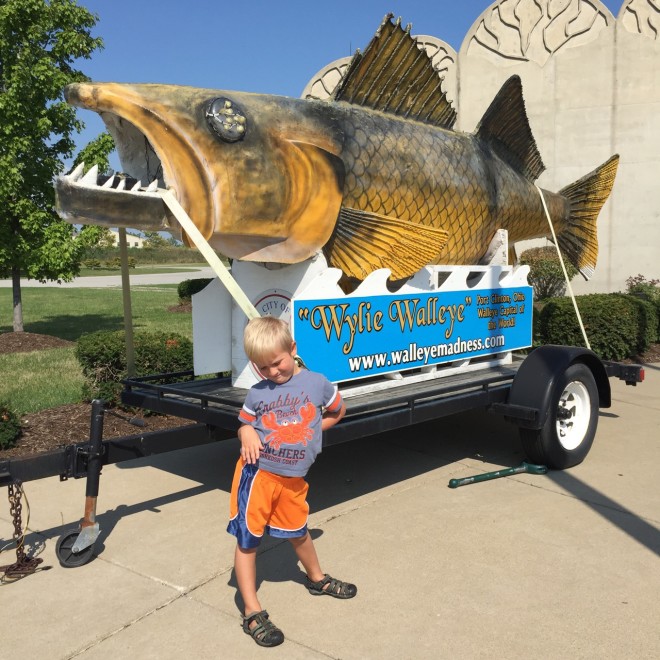 We spent one day around Port Clinton, Marblehead, and Catawba Island, while the second day we traveled around Put-in-Bay and South Bass Island. We arrived first at the Lake Erie Shores & Islands visitors center to pick up some materials and were greeted by Wylie Walleye, the giant light-up walleye who’s dropped every New Year’s Eve in Port Clinton. (In case you didn’t know, Port Clinton is the “Walleye Capital of the World.”) 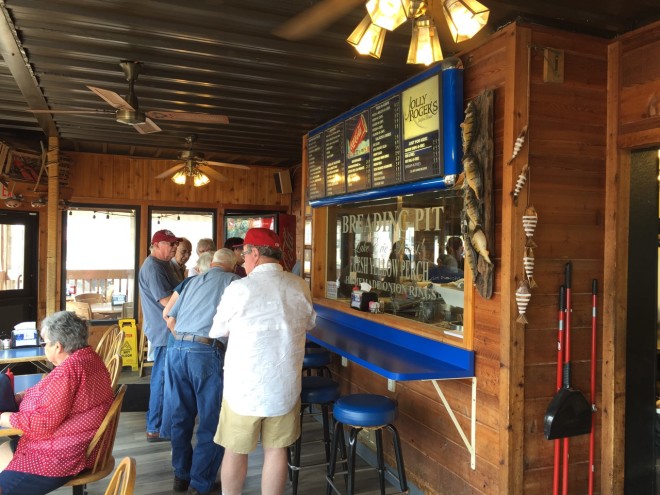 It’s been several years since we’ve traveled up to the Port Clinton area, but we knew our first stop would be Jolly Roger Seafood House. Jolly Roger is an old school eatery specializing in fried seafood. It’s fairly inexpensive, and is an easy way to taste popular Lake Erie catches like perch and walleye. 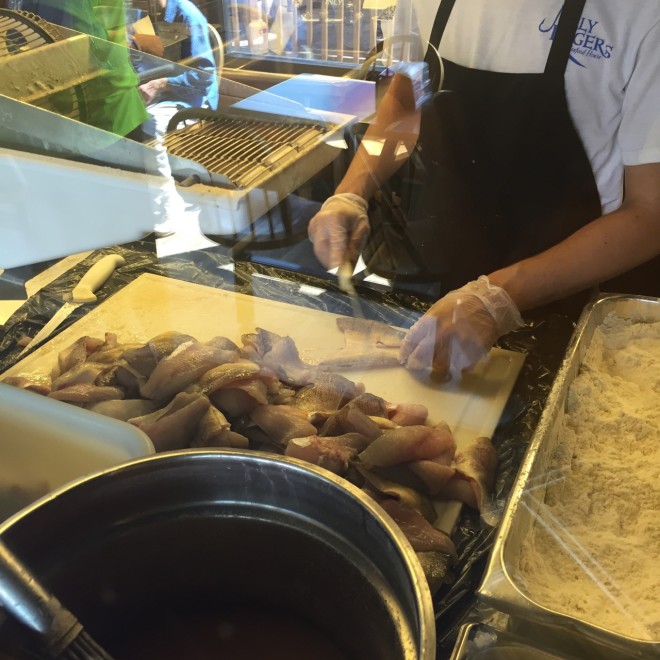 A big window lets you watch the kitchen while they clean, bread, and fry fish. 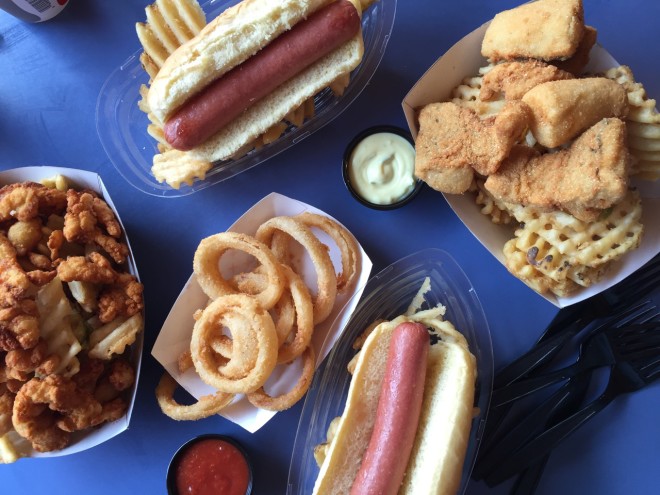 While our boys were in a hotdog mood, we sample the fried oysters (on the left) and walleye (on the right). Both were superb; although nearly everything is fried at Jolly Roger it isn’t greasy. And the portions are generous: we had three boxes of leftovers, two of which were just the big waffle fries. 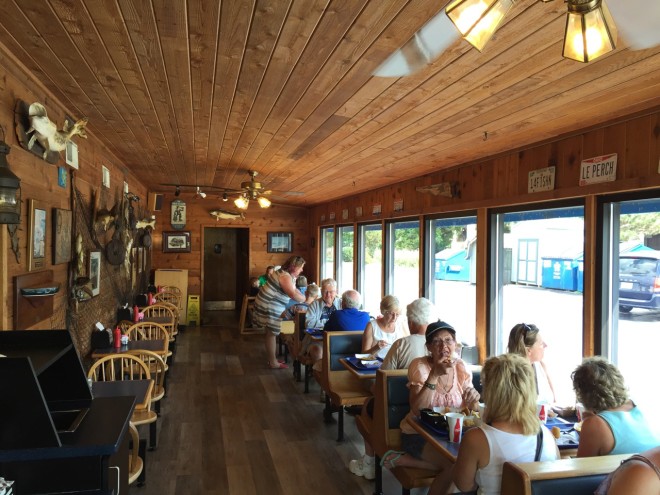 As you can imagine, there’s lots of natural wood and a heavy nautical theme to the decor. 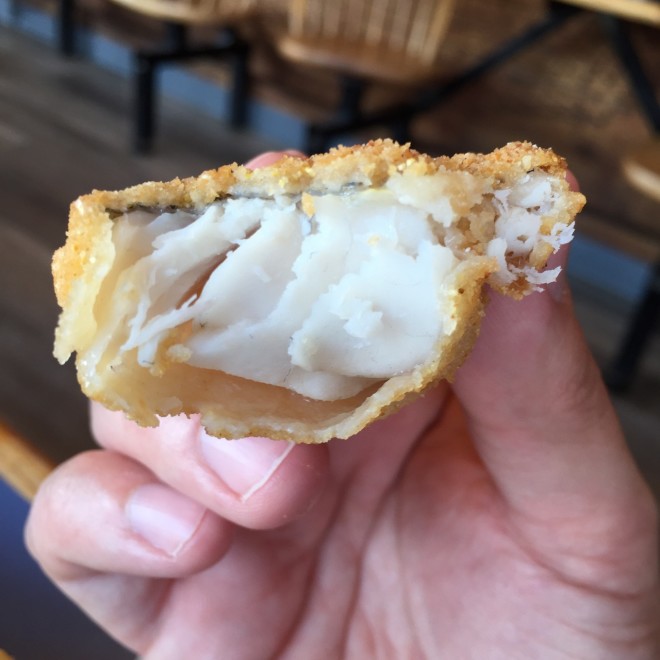 That fried walleye, though… even a couple weeks later I keep thinking about it. 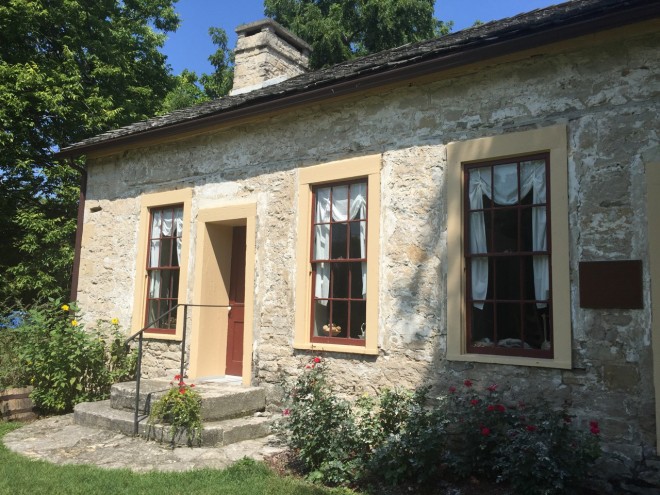 After lunch we headed east to our first lighthouse: Marblehead. Along the way we passed the Keeper’s House, a stone building dating back to 1822 that served as the home for the early keepers, including Rachel Miller Wolcott, the first female lighthouse keeper on the Great Lakes. 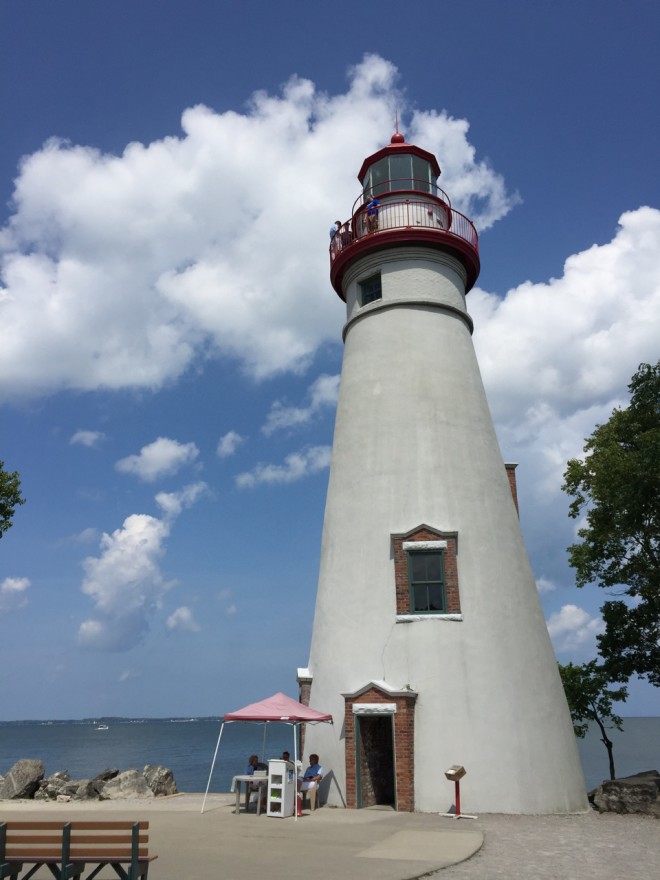 A few minutes’ drive down the road led us to the lighthouse itself. Marblehead is in many ways the quintessential small lighthouse: it’s a picturesque little tower with brick windows and red accents, perched on an outcropping of the Marblehead Peninsula with an expansive view of the islands, miles of rocky and wooded coastline, and even Cedar Point to the southeast. The park itself is always open, but the hours for climbing the lighthouse and seeing the museum are a little funky, which is understandable because it’s all volunteer-run. Keep an eye on the Marblehead Lighthouse Historical Society‘s website for details. 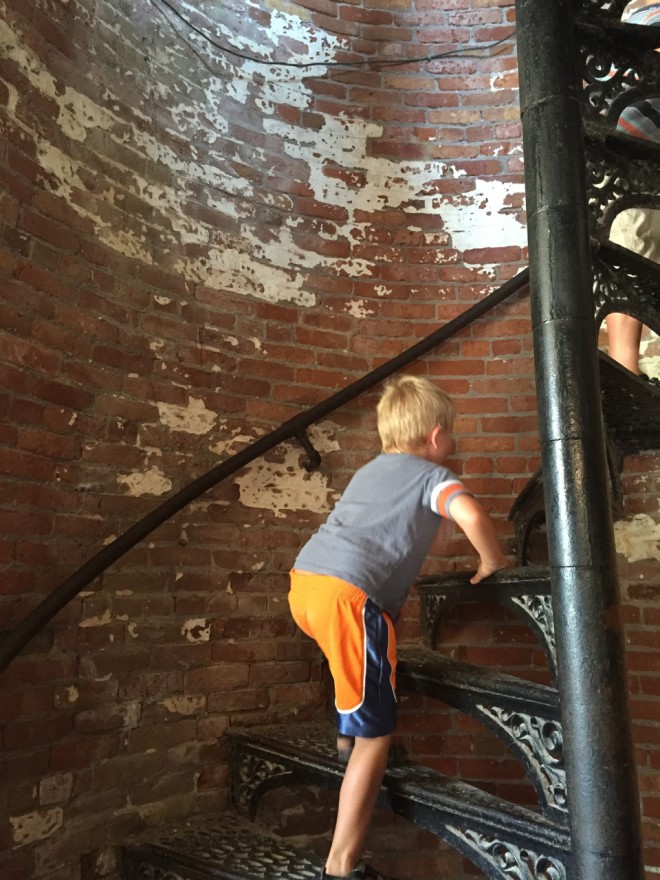 The lighthouse is $3 per person to climb; kids under 6 are free. We paid at the little table out front (they’re cash only, FYI) and then climbed the 77 stairs to the top. 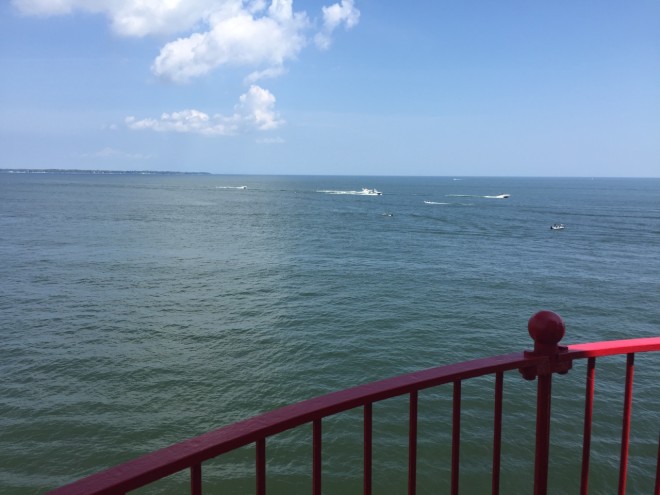 As you can imagine, the views are spectacular. You can see over the trees to the nearby islands, usually with plenty of boats sailing around. Photos don’t do it justice. 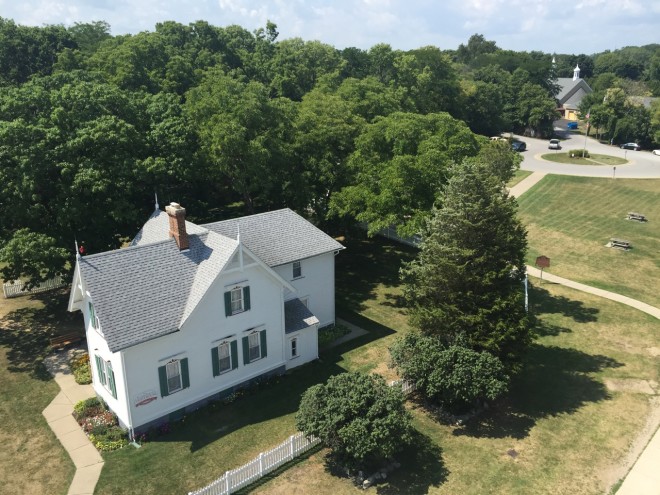 The lighthouse museum is worth peeking into as well. They have plenty of historical items and information on the lighthouse, including the old Fresnel lens. 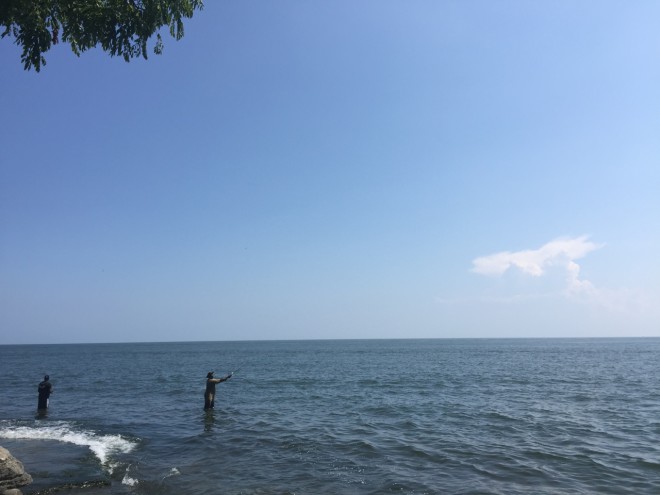 And if you have the time, find some big rocks for sitting or exploring and just enjoy the view. 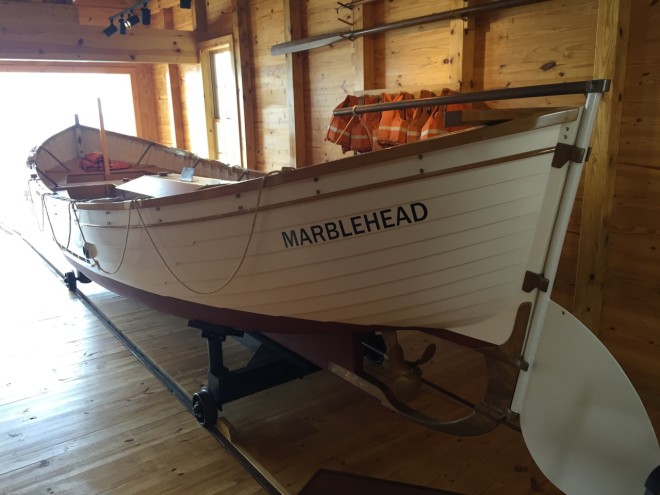 This year they also opened a recreation of a Great Lakes lifesaving station. We’ve seen similar ones on the Outer Banks. These buildings housed the crews and the boats that rescued ships in trouble over the centuries. The building includes various displays, photos, and artifacts, plus a restored lifesaving boat.

Lighthouse count: one down, three to go. 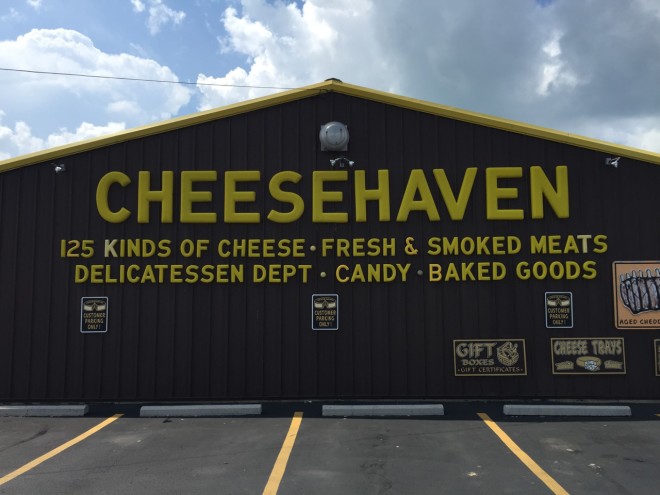 After our lighthouse adventures, we took the boys to another favorite stop: Cheese Haven. 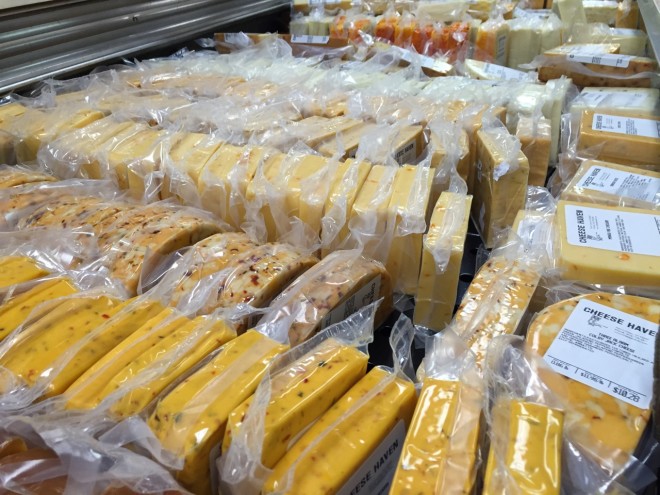 The store features hundreds of cheeses, candy, wine, beer, toys, you name it. Our eight-year-old Will is a particular fan of smoked gouda, so we picked him up a block. He kept referring to the place as “Cheese Heaven.” 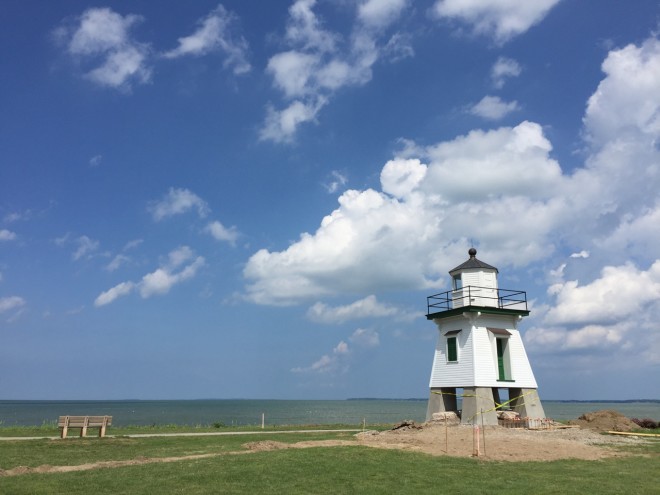 On the way to our hotel we spotted our second lighthouse: the Port Clinton Lighthouse. Our timing this weekend turned out to be perfect. You see, the Port Clinton Lighthouse historically sat at the mouth of the Portage River before being moved to Brand’s Marina in 1952. There it sat for decades, until August 16, when the restored lighthouse was loaded onto a barge, sailed out of the river and into the lake, then placed at Waterworks Park. (See some photos of the move here.) The new spot is perfect, in a public park with a full view of Lake Erie, where residents and visitors can enjoy it.

To top it off: we donated to the lighthouse in Owen’s name, so he is officially a Keeper of the Port Clinton Lighthouse. Alex Thomas and Rich Norgard from the lighthouse non-profit even gave him a signed a poster commemorating the move.

Full disclosure: our hotel and activities we provided by Lake Erie Shores & Islands. Opinions and photos are our own.

Check Out These New Private Dinners at Ray Ray’s Granville

How To Do a Day in Miami County, Ohio

I go by Dr. Breakfast, but in addition to restaurants and recipes, I write about family travel, breweries and distilleries, the arts, outdoor fun, and so much more.